The two legitimate, constitutional purposes of the federal government

A plain, non-mystical reading of the U.S. Constitution shows that the purpose and function of the federal government can be boiled down to just two principles: 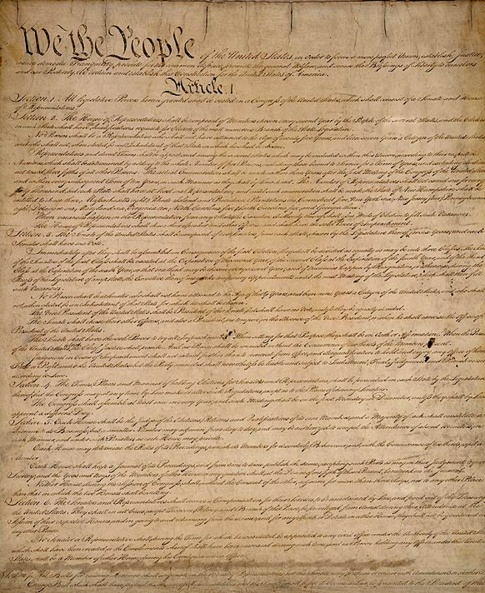 The text of the Constitution gives the details that support these principles.  The first ten amendments were intended to make double sure that the federal government knew its place (they are, every one of them, constraints on federal power, not on state or local power)*.

Agree or disagree?  Are there any other fundamental principles in the U.S. Constitution that are clearly distinct from the above two?

Please be so kind as to support your position in any civil way that you see fit.


* Some of the later amendments did violence to the constitutional relationship between the states and the federal government—but that’s a subject for another post.

Email ThisBlogThis!Share to TwitterShare to FacebookShare to Pinterest
Labels: Constitution

More specifically, as evidenced by Article I, Section 3, Clause 1, the Founders had established the federal Senate to be the voice of the constitutionally powerful state legislatures in the Constitutionally humbled federal government. And the constitutionally powerful states are important where federal taxes versus state taxes are concerned. This is evidenced by the following case precedent established by Chief Justice Marshall, but now wrongly ignored by both federal and state lawmakers. Justice Marshall wrote that the federal government cannot lay taxes in the name of state power issues.

"Congress is not empowered to tax for those purposes which are within the exclusive province of the States." --Chief Justice Marshall, GIBBONS V. OGDEN, 1824.

With this in mind, consider that not only is Obamacare, for example, constitutionally unauthorized as evidenced by the federal Constitution’s silence on public healthcare, but Justice Marshall’s official words appropriately indicate that neither does Congress have the power to lay taxes to fund Obamacare.

So ideally, when constitutionally clueless FDR cried for Congress to make constitutionally unauthorized tax and spending legislation in the 1930s and 40s, legislation which not only usurped state powers but also stole hard-earned citizen dollars that should never have left the states, federal senators should have stood up and stopped Congress from giving FDR what he wanted.

So why didn't federal senators stop Congress from approving legislation which usurped state powers and stole associated taxes? After all, as previously mentioned, the Founders had established the federal Senate to protect state interests.

To begin with, mostly rural US citizens seem to have forgotten about state sovereignty before 1913. This was the year that state legislatures unthinkingly ratified the ill-conceived, anti-state sovereignty 16th and 17th Amendments.

So by the time that FDR demanded his social spending programs from Congress, instead of getting the resounding “hell no” that he deserved from a state sovereignty-saavy Senate, a Senate that understood that its job was to protect state sovereignty, constitutionally inept federal senators unthinkingly did the following. Senators told FDR, “Anything you want FDR,” just as state legislators had unthinkingly ratified the 16th and 17th Amendments decades earlier.

And since FDR was in office long enough to nominate eight pro-big federal government justices by the early 40s, all constitutional firewalls to protect state sovereignty from a corrupt, power-hungry federal government had ultimately failed.

Again, the consequence of the 16th and 17th Amendments is that state lawmakers stupidly made it difficult for themselves to fight constitutionally unauthorized federal laws and taxes legislated by a corrupt Congress that the state legislatures no longer had a voice in.

Are we having fun yet?

The bottom line is that Constitution-defending patriots have a big mess to clean up in both the federal and state legislatues in this year’s midterm elections.

But have you considered how the basic purpose of the Constitution was arguably compromised by the 16th and 17th Amendments?

That's a big part of what I had in mind when I wrote the statement marked by an asterisk at the end of the post.

All in all, I agree with your comments completely. Well said!

In addition to the 16th and 17th, the 14th deserves a place in the rogue's gallery of ill-born amendments. There are many who argue that this one effectively inverted the relationship between the fedgov and the states.

This post has been linked for the HOT5 Daily 3/24/2010, at The Unreligious Right

Thanks for the boost, UNRR!