Government-authored spyware – what a great idea! 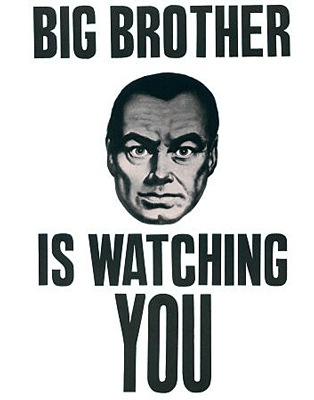 No, it’s not happening yet (that I know of), but the RIAA and MPAA are pushing hard to establish the legal precedent of government surveillance of average citizens’ private in-home activities.

Big Brother is watching you. Actually, it's the RIAA and the MPAA, especially if you're parked on a BitTorrent client. The Electronic Frontier Foundation reports that both organizations--along with a few others--want to take the file-monitoring process a huge step further by infiltrating consumer PCs and deleting the infringing content off their hard drives. How? Through "anti-infringement" spyware developed and enforced by the government.

This is no joke.

"There are several technologies and methods that can be used by network administrators and providers...these include [consumer] tools for managing copyright infringement from the home (based on tools used to protect consumers from viruses and malware)," reads a caption in a joint comment (pdf) filed by the MPAA and RIAA.

The joint comment goes on to suggest other means of copyright enforcement including a mandatory scan on all internet connections to interdict transfers of illegal content, physical searches at all borders of personal media players, laptops, and USB sticks. There's even an indication that the parties want to enforce international bullying to force other countries to put similar policies in place.

A couple of observations are in order.

First, the only reason  the RIAA and MPAA could even dream of getting the federal government to do something like this is that they know the fedgov recognizes no meaningful limits on its power.  Industries take advantage of this fact all of the time – using the government as a bludgeon against one’s competitors has become a time-honored tradition in this country – but the RIAA/MPAA proposal goes beyond what we normally see.

Many people who will complain that this is an unconstitutional invasion of privacy and a denial of due process will, the next day, demand that the government provide health care, jobless benefits, welfare, etc.  We can’t have it both ways.  Either the federal government is bound by the U.S. Constitution, or it isn’t.

Second, is there any real difference between government-authored spyware on our computers and government-installed surveillance cameras in our homes?  Both would have the same official purpose – crime prevention.  I wonder if RIAA and MPAA executives would consent to government video surveillance of their mansions, “just in case” they decided to do something illegal.

Unions could indeed be the strongest force for good government, if it wasn’t for the fact that they are unions

Today’s email update from CNSNews had this ironic juxtaposition of headlines:

Way to court the conservative base, Mitt

Mitt Romney’s opposition to ObamaCare appears to be based on technical objections – in other words, Romney thinks he would have done a better job of expanding his Mass-Care miracle to the national level.  NY Times, April 9:

The Democratic National Committee has posted a video compilation of Mr. Romney’s comments praising the Massachusetts health insurance mandate. Twice last week, Mr. Obama pointedly observed that Mr. Romney seemed to be lambasting a federal plan that was derivative of his own Massachusetts model.

“I keep on scratching my head,” Mr. Obama said at a fund-raising reception in Boston. “I say, ‘Boy, this Massachusetts thing, who designed that?’ ”

In response, Mr. Romney is reminding audiences that Mr. Obama has cast the Republicans as the “party of no,” devoid of ideas. “And yet,” Mr. Romney said in Bedford, “he’s saying that I was the guy that came up with the idea for what he did. He can’t have it both ways.”

He added, “If ever again somewhere down the road I would be debating him, I would be happy to take credit for his accomplishment.”

Yes, he’s bragging about the fact that ObamaCare got its inspiration from Romney’s Mass-Care, which some insist will end up bankrupting the state of Massachusetts.

Remember, Mitt: the GOP’s conservative base dominates the primary voting.  If you want to trick enough of them into thinking you’re a conservative, you need to stop showing your true colors.

Vanity, thy name is Barack Obama

What rankles, though, is Obama's habit of putting down America while praising himself. The laughable assertion that Obama has taken 'historic steps to improve our own democracy' shows not humility but an extreme vanity. A truly humble president would occasionally evince some doubt as to whether he is worthy to lead America. Obama seems to doubt whether America is worthy of being led by him.

AP reported last week that nearly half of US households will have no income tax liability whatsoever this year:


About 47 percent will pay no federal income taxes at all for 2009. Either their incomes were too low, or they qualified for enough credits, deductions and exemptions to eliminate their liability. That's according to projections by the Tax Policy Center, a Washington research organization.

The untaxed 47%, once they realize the power of their position, will gladly vote for politicians who promise to raise taxes on someone else, while the remaining 53% can be divided and conquered on other issues.
“A government that robs Peter to pay Paul can always depend on the support of Paul.” – George Bernard Shaw 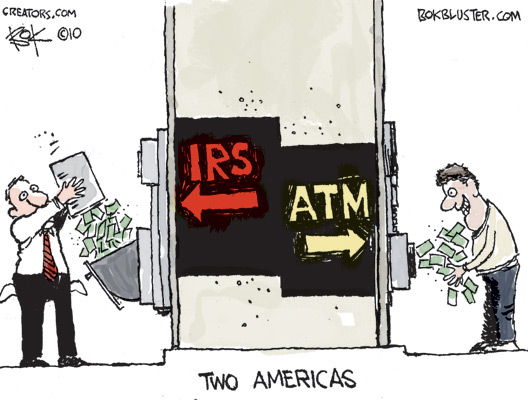 US Supreme Court Justice John Paul Stevens had already telegraphed his intention to retire while Obama is president, so it was only a matter of when.

The WaPo reports today that he has now informed the president that he will retire at the end of the Court’s current term.  Why now?  On the surface, the timing seems pretty routine:

Stevens said he was announcing now so that the president would have time to make a nomination and the Senate to confirm in time for the start of the court's new term next October.

But why this year?  Stevens has been quite clear that he didn’t want a Republican to name his successor, so in theory his retirement could have, for example, waited until next year.

Then again, the Obama White House senses an ill wind blowing among the electorate, a wind that might sweep some or all of the Democrat majority out of the Senate in November.

Even if the Dems retain their majority,  the loss of just a few seats would force Obama to choose a nominee that is far less radical than he would like.   Hence, given the uncertainties of November, there is no better time than now for Obama to get a justice more to his liking.

Is there any serious doubt that Stevens is deferring to the political calculations of the administration?

Yes, yes, I know, it happens with Republican presidents too.

The notion of an independent judiciary is long dead – yet another symptom of the twilight years of the American republic.

Phylllis Schlafly makes her case for the type of person who should be nominated to replace John Paul Stevens, should he be the next to retire:

For as long as we can remember, the U.S. Supreme Court has included at least one military veteran. Recent examples include Republican-appointed Chief Justice William Rehnquist, who died in 2005, and Justice John Paul Stevens, who is expected to resign this year.

The Democrats have not placed a veteran on the Supreme Court in nearly half a century. When President Obama fills Stevens' seat, will the High Court be left without anyone who has military experience?


Veterans in the U.S. Senate should make sure that such an embarrassment does not occur. Cases concerning the military appear every year before the Supreme Court, and our nation will not be well-served by a court lacking in military experience.

With all due respect, Mrs. Schlafly, we shouldn’t be concerning ourselves with whether or not this group or that group is respresented among The Nine.

For my part, the only special interest I want to see represented in the Supreme Court is The Constitution of the United States.

Phylllis Schlafly makes her case for the type of person who should be nominated to replace John Paul Stevens, should he be the next to retire:

For as long as we can remember, the U.S. Supreme Court has included at least one military veteran. Recent examples include Republican-appointed Chief Justice William Rehnquist, who died in 2005, and Justice John Paul Stevens, who is expected to resign this year.

The Democrats have not placed a veteran on the Supreme Court in nearly half a century. When President Obama fills Stevens' seat, will the High Court be left without anyone who has military experience?

Veterans in the U.S. Senate should make sure that such an embarrassment does not occur. Cases concerning the military appear every year before the Supreme Court, and our nation will not be well-served by a court lacking in military experience.

With all due respect, Mrs. Schlafly, we shouldn’t be concerning ourselves with whether or not this group or that group is respresented among The Nine.

For my part, the only special interest I want to see represented in the Supreme Court is The Constitution of the United States.