Patriot Post has provided a handy “bingo” card that will allow you to keep track of President Obama’s favorite buzz phrases during Wednesday night’s State of the Union speech (click image to view it full-sized). 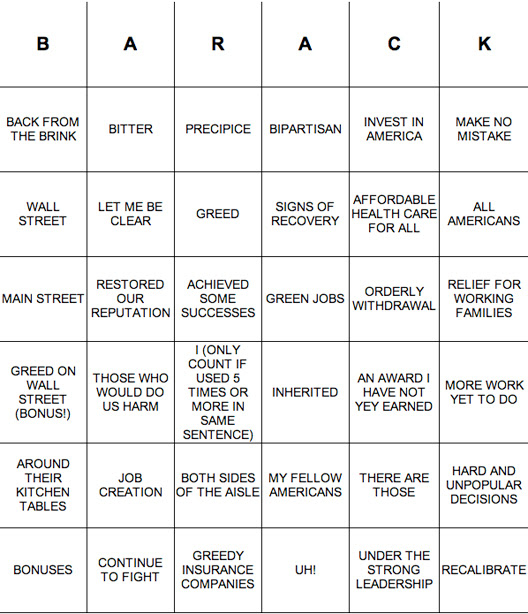 In 2005 I did a series of posts outlining various political and demographic forces working against the attempted creation of the european superstate.

How are they doing now? Even if political integration succeeds at first, it’s only a matter of time before the demographic time bomb alters the region beyond the recognition of anybody now living.

A January 21 article in German news website “The Local” outlines the challenge now facing that country:

Germany has one of the lowest birth rates in Europe - 1.4 children per woman - and data released in November suggested that at current rates, the country's population could shrink by up to 17 million in the next 50 years.

The article goes on to note the two major solutions that have been proposed.  Chancellor Merkel has introduced various incentives to encourage Germans to have more kids, but they don’t appear to be accepting the challenge.

That leaves massive immigration as the only real alternative.

Prof. Ralf E. Ulrich, a demographics specialist at the University of Bielefeld, said the figures were a wake up call for Germany to start a societal and political discussion about making the country more attractive to immigrants. He said the alternative would be forcing people to work much longer than they do now and slashing Germany's pension benefits.

Despite the fact that Germany would eventually be transformed into a country that is no longer German, natives are most likely to accept this solution, since it involves the least amount of personal inconvenience and allows the country’s welfare state to stagger along for a few more years… at least until the future majority population changes the laws more to their liking.