The Associated Press reports that another major chunk of the façade known as the “economic recovery” has crumbled:

Sales of new homes collapsed in May, sinking 33 percent to the lowest level on record as potential buyers stopped shopping for homes once they could no longer receive government tax credits.

The bleak report from the Commerce Department is the first sign of how the expiration of federal tax credits could affect the nation's housing market.

The credits expired April 30. That's when a new-home buyer would have had to sign a contract to qualify.

"We fear that the appetite to buy a home has disappeared alongside the tax credit," Paul Dales, U.S. economist with Capital Economics," wrote in a note. "After all, unemployment remains high, job security is low and credit conditions are tight."

Sound familiar?  Last summer, the “Cash for Clunkers” program created an artificially high demand for automobiles, almost certainly spurring purchases by people who otherwise wouldn’t have (or shouldn’t have) done so.  Once the C4C program ended, auto sales dropped through the floor.

Here we go again.  The federal tax credits for new home purchases is gone, and sales have dropped to a level never before seen in the 47 years that the government has been tracking this statistic.

Just like we saw with C4C, it is likely that many who bought a home in recent months should not have done so.  How many of them will be in foreclosure in just a few short years?

Remember these examples each time you are told that we’re in the midst of an economic recovery.

Given the fresh storm clouds gathering on the horizon, now may not be the best time to buy a home, with or without a tax credit incentive.

If corporate earnings appear to be improving right now…

…it may very well be that businesses are shifting as much income and production as possible to this year.  Arthur Laffer writes in the Wall Street Journal June 6:

On or about Jan. 1, 2011, federal, state and local tax rates are scheduled to rise quite sharply. President George W. Bush's tax cuts expire on that date, meaning that the highest federal personal income tax rate will go 39.6% from 35%, the highest federal dividend tax rate pops up to 39.6% from 15%, the capital gains tax rate to 20% from 15%, and the estate tax rate to 55% from zero. Lots and lots of other changes will also occur as a result of the sunset provision in the Bush tax cuts.

Tax rates have been and will be raised on income earned from off-shore investments. Payroll taxes are already scheduled to rise in 2013 and the Alternative Minimum Tax (AMT) will be digging deeper and deeper into middle-income taxpayers. And there's always the celebrated tax increase on Cadillac health care plans. State and local tax rates are also going up in 2011 as they did in 2010. Tax rate increases next year are everywhere.

Laffer believes that allowing the tax cuts to expire will result in an economic collapse next year that will dwarf what we’ve seen so far.  To be sure, a sudden, massive tax increase in the middle of a weak economy will not end well.

I had not heard of Clarke and Dawe before, but I love the way they “explain” the impossibly tangled web of debt that may bring down one economy after another. 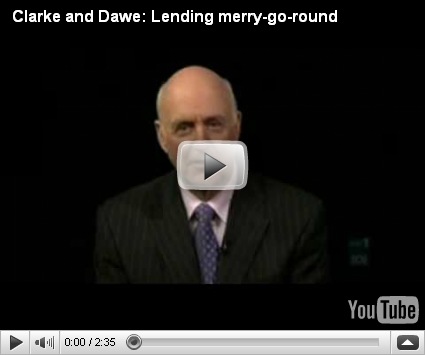 Various countries in Europe are the first to falter, but the US appears to be heading for the precipice as well.  Bloomberg, June 4:

President Barack Obama is poised to increase the U.S. debt to a level that exceeds the value of the nation’s annual economic output, a step toward what Bill Gross called a “debt super cycle.”

The CHART OF THE DAY tracks U.S. gross domestic product and the government’s total debt, which rose past $13 trillion for the first time this month. The amount owed will surpass GDP in 2012, based on forecasts by the International Monetary Fund. The lower panel shows U.S. annual GDP growth as tracked by the IMF, which projects the world’s largest economy to expand at a slower pace than the 3.2 percent average during the past five decades.

“Over the long term, interest rates on government debt will likely have to rise to attract investors,” said Hiroki Shimazu, a market economist in Tokyo at Nikko Cordial Securities Inc., a unit of Japan’s third-largest publicly traded bank. “That will be a big burden on the government and the people.”

Click on the “Graphic” tab at the above link to view the chart.

With the announcement of each new boycott of Arizona companies (such as the one just approved by L.A. County), I wonder if the Legion of the Outraged has thought this through completely.

If, somehow, these boycotts manage to have an actual economic impact on Arizona businesses, just who do they think will lose their jobs first?  Wouldn't it be the lower-income employees?

Even if the middle- and upper-class somehow got hit first, their ensuing decrease in economic activity would affect... who?

I cannot escape the conclusion that those who purport to champion the cause of Hispanics in Arizona secretly hate them.
Posted by Tim at 6/02/2010 01:22:00 PM 4 comments: