Donald Trump frightens me, and so do his followers

Donald Trump frightens me, and so do his followers. I'm going on my general observations of the Trump phenomenon, so in the unlikely event you're a Trump fan AND you're a constitutionalist, my apologies for lumping you in with the rest -- I'm curious to know how both sentiments can coexist. With that said...


Trump, like Obama before him, and like any good demagogue, has the ability to connect deeply with the emotions of his followers, rather than their minds. It seems that Trump's fans would allow him to be every bit the tyrant he's essentially pledged to be (and must be to "fix" our country outside of the constitutional boundaries of the president's powers)...as long as he delivers on his promise to secure the borders.

I've often argued that George W. Bush, whatever other qualities he may have had, was no friend of the Constitution. Chancellor Trump would be much, much worse in this regard.

Looking at schemes like the "living wage" movement, it might be tempting to think that the Left was interested in reforming capitalism.  A closer look reveals that this isn't the case. 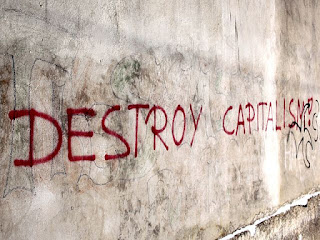 If reform was the goal, you'd see the left investing its considerable resources to create banks, large corporations, and small businesses (like restaurants), and to run them according to the best progressive principles.

We don't see that at all.  Instead, the Left does nothing but make crippling demands of existing banks, large corporations, and small businesses.

The left doesn't want to reform capitalism; it wants to destroy capitalism, and make paupers of us all (except the governing elites, of course).

Scratch an anti-GMO activist, and you'll likely find a Marxist underneath

Slate's Will Saletan has a great article (published July 15) on his year-long investigation into the anti-GMO movement. He says this in his introduction (emphasis added):


The central premise of these laws—and the main source of consumer anxiety, which has sparked corporate interest in GMO-free food—is concern about health. Last year, in a survey by the Pew Research Center, 57 percent of Americans said it’s generally “unsafe to eat genetically modified foods.” Vermont says the primary purpose of its labeling law is to help people “avoid potential health risks of food produced from genetic engineering.” Chipotle notes that 300 scientists have “signed a statement rejecting the claim that there is a scientific consensus on the safety of GMOs for human consumption.” Until more studies are conducted, Chipotle says, “We believe it is prudent to take a cautious approach toward GMOs.”

The World Health Organization, the American Medical Association, the National Academy of Sciences, and the American Association for the Advancement of Science have all declared that there’s no good evidence GMOs are unsafe. Hundreds of studies back up that conclusion. But many of us don’t trust these assurances. We’re drawn to skeptics who say that there’s more to the story, that some studies have found risks associated with GMOs, and that Monsanto is covering it up.

I’ve spent much of the past year digging into the evidence. Here’s what I’ve learned. First, it’s true that the issue is complicated. But the deeper you dig, the more fraud you find in the case against GMOs. It’s full of errors, fallacies, misconceptions, misrepresentations, and lies. The people who tell you that Monsanto is hiding the truth are themselves hiding evidence that their own allegations about GMOs are false. They’re counting on you to feel overwhelmed by the science and to accept, as a gut presumption, their message of distrust.

Saletan's presentation is copiously documented, unlike most of the anti-GMO alarmism we encounter on Facebook and in other social media.

The science behind the anti-GMO movement has always been, and continues to be, fatally weak, but no matter: it SOUNDS plausible enough to scare the average consumer.  What motivates the most ardent anti-GMO activists is not a commitment to scientific truth, but rather a commitment to anticapitalism.

Because GMO food can be patented, evil corporations profit from its consumption.  No matter that genetic improvements to plant genomes can and do literally save lives, especially in the third world (through vitamin infusion and through integration of natural resistance to drought, pests, and disease, among other things) -- Marxist ideology trumps the lives and health of these people.