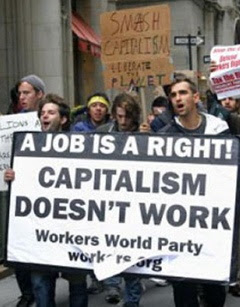 Suppose you got everything you seem to want, up to and including the overthrow of capitalism.

You will not be able to control what takes its place.  Seriously.

You envision a utopian society, characterized by economic and social justice, where all is sunshine, rainbows and unicorns, where everyone happily puts the needs of the many above the needs of the few.

A commenter on my earlier Perry/Al Gore post, instead of interacting with the actual topic of the post, took the opportunity to promote his favored candidate, Herman Cain.  Fair enough.

I was planning to answer him there, but I thought it would be good to do a separate post regarding my first impressions of Cain, who is definitely a rising star in the latest polls.  Cain appears to have been the chief beneficiary of Sarah Palin’s decision to bow out of the 2012 race.

I like Cain a lot, but the fact that he allowed the media to manipulate him regarding the Perry hunting lease... that doesn't give me optimism regarding his ability to handle the media onslaught he would experience in office.

I like the fact that he has a ton of executive experience in business, but that is applicable only in the president's role as head of the Executive branch (i.e. overseeing the various cabinet departments and bureaucracies).  I see little in his resume that would prepare him for the task of getting what he wants against the wishes of a hostile Congress.

Perry has a big advantage in this regard.  I believe this kind of experience and skill will be indispensable for anyone who seeks not just to roll back the usurpations of the Obama administration, but also to get us on the road toward constitutional government.

Perry's gaffes regarding Gardasil and the Texas DREAM Act have annoyed a lot of conservatives, but they also give insight into an aspect of Perry's character: Once he's convinced something is the right thing to do, he won't back down, regardless of the opposition.  Get him focused on the right things as president, and I believe conservatives will find that they've rarely had a better ally in the White House.

Observations on politics, culture, and life in general (#1)

(This is the first of what I hope will be an ongoing, occasional series)

#1: However noble its origins, and however admirable its original cause, in time a political party becomes concerned with little more than accumulating and retaining political power.

The Founders of our country had leaders like George Washington in mind when they crafted the Constitution – men of virtue, uninterested in exercising power for one’s personal benefit or for the benefit of those one identified with.

When Washington left office, America was at a dangerous crossroad.  What kind of men would follow him?  The Founders had done what they could to disperse power as much as possible among the branches of the federal government and between the federal and state governments, but this new form of government was vulnerable to those who would abuse it.

In his Farewell Address, Washington warned the nation that our experiment with republican government wouldn’t survive long unless (1) we the people remained virtuous, and (2) we insisted that our leaders be virtuous as well.

Along with this general warning, Washington also warned specifically about the “spirit of party” – the natural tendency of the electorate to organize into political parties or movements.

I have already intimated to you the danger of parties in the State, with particular reference to the founding of them on geographical discriminations. Let me now take a more comprehensive view, and warn you in the most solemn manner against the baneful effects of the spirit of party generally.

This spirit, unfortunately, is inseparable from our nature, having its root in the strongest passions of the human mind. It exists under different shapes in all governments, more or less stifled, controlled, or repressed; but, in those of the popular form, it is seen in its greatest rankness, and is truly their worst enemy.

The alternate domination of one faction over another, sharpened by the spirit of revenge, natural to party dissension, which in different ages and countries has perpetrated the most horrid enormities, is itself a frightful despotism. But this leads at length to a more formal and permanent despotism. The disorders and miseries which result gradually incline the minds of men to seek security and repose in the absolute power of an individual; and sooner or later the chief of some prevailing faction, more able or more fortunate than his competitors, turns this disposition to the purposes of his own elevation, on the ruins of public liberty.

Without looking forward to an extremity of this kind (which nevertheless ought not to be entirely out of sight), the common and continual mischiefs of the spirit of party are sufficient to make it the interest and duty of a wise people to discourage and restrain it.

It serves always to distract the public councils and enfeeble the public administration. It agitates the community with ill-founded jealousies and false alarms, kindles the animosity of one part against another, foments occasionally riot and insurrection. It opens the door to foreign influence and corruption, which finds a facilitated access to the government itself through the channels of party passions. Thus the policy and the will of one country are subjected to the policy and will of another.

There is an opinion that parties in free countries are useful checks upon the administration of the government and serve to keep alive the spirit of liberty. This within certain limits is probably true; and in governments of a monarchical cast, patriotism may look with indulgence, if not with favor, upon the spirit of party. But in those of the popular character, in governments purely elective, it is a spirit not to be encouraged. From their natural tendency, it is certain there will always be enough of that spirit for every salutary purpose. And there being constant danger of excess, the effort ought to be by force of public opinion, to mitigate and assuage it. A fire not to be quenched, it demands a uniform vigilance to prevent its bursting into a flame, lest, instead of warming, it should consume.

As I acknowledged in the Observation, political parties often have noble and admirable beginnings.  But just as government itself naturally draws those who seek power for the benefit of themselves and their ideologies, such also is the eventual destiny of political movements that attract enough voters to make a difference in elections.

In the one case, the politician will say or do whatever he deems necessary to retain his power and privilege.  In the other case, a political party will eventually take (or promise to take) whatever stands are necessary to increase its power and influence in elected government.

All of this to say: Political parties are in many ways necessary as a means to provide a collective voice to those whose voice would otherwise not be heard.  But, we must always be careful to be true to our own beliefs and values, and never invest our identity in any particular movement – because history shows that it’s just a matter of time before that movement betrays its founding ideals.

We’ve seen that with the two major parties.  If the TEA party movement remains viable in the long term, I have no doubt that it will eventually do so as well.  Such is the fallen nature of mankind.