(or no respect for it, at the very least)

(CNSNews.com) - Stemming teen dating violence and safeguarding children is a "Cabinet-level priority" of the Obama administration, Attorney General Eric Holder told a gathering at the Justice Department on Friday.

[...] "That’s what the National Advisory Committee -- and today’s meeting – is all about.  By working together, I believe we can empower adolescents to understand and to develop healthy relationships before violence and abuse can begin. And I am confident that we can help more young people identify signs of abuse, and assist them in locating services."

The goal of Friday's meeting is to work on a "strategic, comprehensive action plan," Holder said in his prepared remarks.

Are there any local issues that the Obama administration refuses to meddle in simply because they're none of the federal government's business?
Posted by Tim at 1/28/2011 01:58:00 PM No comments:

As reported by Kristinn Taylor and Andrea Shea King at Big Journalism, January 21:


The Washington Post is engaging in online political activism by encouraging its readers to boycott news coverage of Sarah Palin.

The Post has picked up the call initiated this morning by Post columnist Dana Milbank, adding a Twitter link on the column page. The link generates a message to be sent from a Twitter member’s page that reads, “I’m making February a Palin-free month. Will you join me?”

The Post added the Twitter link to Milbank’s column this afternoon, several hours after running and pulling a Washington Post online poll about boycotting Sarah Palin news coverage.  The poll initially accompanied The Post’s Milbank op-ed but was pulled within hours of publication at WashingtonPost.com.

The poll, which questioned Post readers whether they would support a Palin news boycott, received the support of eighty percent of approximately 450 votes cast.

Well, not in so many words.  But what else to make of an act that seems certain to choke the life out of a weak economy?


Democrats in the Illinois Legislature on Wednesday approved a 66 percent income-tax increase in a desperate and politically risky effort to end the state's crippling budget crisis.

The increase now goes to Democratic Gov. Pat Quinn, who supports the plan to temporarily raise the personal tax rate to 5 percent, a two-thirds increase from the current 3 percent rate. Corporate taxes also would climb as part of the effort to close a budget hole that could hit $15 billion this year.

The higher taxes will generate about $6.8 billion a year, Quinn's office said -- a major increase by any measure. In percentage terms, 66 percent might be the biggest increase any state has adopted while grappling with recent economic woes.

I suspect that the revenue estimate in the third paragraph assumes economic activity will remain constant despite the tax increase. Is that a valid assumption?


The founder of [sandwich shop chain] Jimmy John's said he has applied for Florida residency and may recommend that his corporate headquarters move out-of-state as a result of the Illinois tax increases enacted last week.

Chevy Volt, "Car of the Year"? About as meaningless as an Academy Award 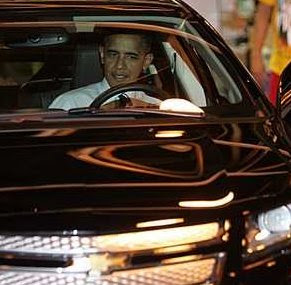 Daily Finance reports today that the Chevy Volt has been named Car of the Year at the Detroit Auto Show:


The Volt's selection for the Car of the Year award wasn't much of a surprise. Reviews by the automotive press have largely praised the vehicle's design, and the Volt has taken several other awards already, including Motor Trend magazine's Car of the Year.

The auto industry declaring an automobile to be critically acclaimed is about as meaningful as the film industry awarding honors to various of its own products.

Oscar-winning movies often end up being complete duds with the unwashed masses.  I'm sure that we philistines will fail to get sucked in by the hype swirling around the Car of the Year as well.
Posted by Tim at 1/10/2011 02:55:00 PM No comments:

House Speaker's aides to be formally sworn in -- Meaningless symbolism or a serious commitment to the Constitution?


In another statement of the new House Republican majority’s commitment to the Constitution, aides to incoming Speaker John Boehner plan to take their oath of office Tuesday morning — a day before the same oath is administered to the 435 House members of the new Congress.

At Boehner’s request, Chief Justice John Roberts will preside over the staff ceremony, which may be a first in congressional history. Aides in Boehner’s Washington and district offices are expected to take the oath in the Capitol in a private, low-key event with no press coverage, a Boehner aide said.

[...] In a sense, the ceremony will be symbolic. House aides already commit to supporting the Constitution when they sign their employment forms. But the formal event will be another measure that Boehner takes seriously his new responsibility.

Dare we hope? Forgive our cynicism (borne of a long history of disappointments), but we'll withhold our applause until we see such gestures followed up with genuine substance.  Onward!
Posted by Tim at 1/04/2011 04:57:00 PM No comments:


Under the headline, "Construction Stops at Physician Hospitals," Politico reports today that "Physician Hospitals of America says that construction had to stop at 45 hospitals nationwide or they would not be able to bill Medicare for treatments." Stopping construction at doctor-owned hospitals might not seem like the best way to boost the economy or to promote greater access and choice in health care, but that exactly what Obamacare is doing.

Kenneth Artz of the Heartland Institute explains, "Section 6001 of the health care law effectively bans new physician-owned hospitals (POHs) from starting up, and it keeps existing ones from expanding." Politico adds, "Friday [New Year's Eve] marked the last day physician-owned hospitals could get Medicare certification covering their new or expanded hospitals, one of the latest provisions of the reform law to go into effect."

Memo to GOP 2012 hopefuls who are addicted to corn alcohol

The Iowa caucuses have become so ridiculously overinflated in their importance that even many of the professed small-government conservatives can't seem to resist groveling at the feet of this tiny fraction of the electorate.

NRO notes today that it really does matter what the GOP's 2012 candidate believes about ethanol subsidies:


There are four potential midwestern 2012 Republican presidential nominees: Minnesota governor Tim Pawlenty, Indiana governor Mitch Daniels, South Dakota senator John Thune, and Indiana congressman Mike Pence. When it comes to doling out favors to the ethanol industry, none of them can credibly claim his attitude was “just say no.”

Does it matter? Absolutely: As this year’s tariff and tax-credit extensions showed, even a Tea Party–driven small-government surge can’t stop politicians from kowtowing to the ethanol lobby. Further, a Republican president who is willing to carve out exemptions for ethanol interests will lack credibility when he battles spending or tax breaks benefiting other special interests. And finally, while some claim that ethanol will allow our nation to achieve energy independence, the fact that the highest approved corn-gas blend is only 15 percent ethanol (and is approved only for certain automobile models from 2007 or later) suggests that an America running on corn is unlikely in the extreme.

GOP candidates, please take note that the reenergized constitutionalist/conservative base that brought you back to power hasn't disbanded.  You are being watched closely by people who think that corn alcohol is not fit to be served at a tea party.

If you don't give up your addiction, Obama will have no trouble whatsover observing that the GOP seems to differ from the Democrats only in its spending priorities.
Posted by Tim at 1/04/2011 10:28:00 AM No comments: