"A well-regulated militia": the Left's delusion about the Second Amendment 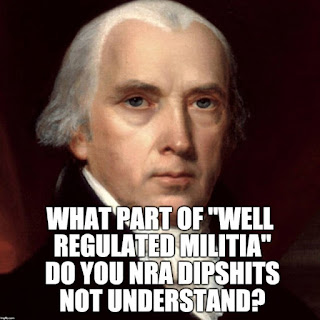 This image, which is making its way around Facebook in the wake of the Orlando nightclub massacre, zeros in on the part of the Constitution's Second Amendment that is the most confusing to modern eyes.

There was widespread suspicion that the proposed Constitution didn't go far enough to explicitly curtail the powers of the central government. The dissenters felt that individual rights would quickly fall prey to expanding government power in the absence of explicit declarations of the inviolable rights of individuals.

The Bill of Rights is the answer to these concerns, and the promise of these was sufficient to get all of the states to sign on to the Constitution.

Here, then, is the complete text of the Second Amendment:


A well regulated Militia, being necessary to the security of a free State, the right of the people to keep and bear Arms, shall not be infringed.

Noting the neighboring words "security" and "State", many on the Left would have us believe that the phrase "well regulated Militia" is referring to the military and to state and local law-enforcement agencies -- that this amendment guarantees the government the ability to undertake any and all efforts necessary to protect the country (military) and maintain public order (local law enforcement).

But why, in the midst of a collection of amendments designed to guarantee individual rights, would the Founders drop in a grant of government power that, in essence, had the potential to render the rest of the Bill of Rights moot?

Does anyone honestly think that the dissenters would have gone along with this new government if this were the case?  All of human history testifies that when the people of a country have no means to resist the tyranny of their government, their government will sooner or later drift into tyranny.

So what, then, did the phrase "well regulated Militia" mean to 18th-century American eyes?

The militia were the ones who were expected to grab their guns and take action whenever the need arose.  Most importantly to the contemporary debate, though, all able-bodied males, regardless of occupation, were considered part of the militia, whether or not they had ever served in the armed forces.  This in itself argues for the notion that this amendment was not a restrictive one.

What about "well regulated"?  Surely this phrase shows that arms-bearing must be done under the supervision of the government, doesn't it?  Actually, no.  At the time, the phrase "well regulated" was used interchangeably with "well trained" or "orderly".

Well, then, what about "security of a free State"?  In context, "state" is obviously referring to the nation itself, not to the government.  There are two ways of seeing the phrase "free state": (1) a nation as a whole free from the control of other nations (this is the modern understanding of the term), and (2) a nation comprised of individuals who are free from the oppression of their government.

If we accept the notion of the entire Bill of Rights being a Bill of Individual Rights, that second interpretation of "free state" gains a considerable amount of weight.

So. Taking the Second Amendment as a whole, I see this paraphrased declaration: A nation of citizens in the possession of and well-trained in the use of firearms is an effective bulwark both against conquest by other nations and against oppression by that nation's government.  Therefore, the central government shall take no steps to interfere with the right of the citizens to keep and bear such firearms.