Clickhole brings us the following "news" from Marvel:


It’s time to get excited, because Marvel Comics just announced a new superhero that advances diversity in comics in a major way. The series is called Luminary, and it tells the story of a mild-mannered Caucasian man named Percy Pendleton who gains incredible superhuman powers and constantly expresses his regret that he was blessed with those abilities instead of a Latina woman, who could be a role model for young Hispanic girls in addition to merely fighting crime.

[...] While working as a nuclear physicist at Stark Industries, Percy is caught in a particle-accelerator explosion. A surge of neutrinos floods his nervous system and transforms him into the incredible Luminary, a hero whose amazing powers of flight, super strength, and energy manipulation make him concerned that as a white man he does nothing to reflect the face of a changing America, which is increasingly Hispanic and female.

I was heretofore unfamiliar with Clickhole, so it took a few minutes of research to reassure myself that this was satire.  In these troubled times, I wouldn't put it past Marvel to infuse an established superhero with some white-privilege angst, but I doubt that they're ready to make such an idea the basis of a superhero.
Posted by Tim at 12/30/2016 01:32:00 PM No comments:

You privileged white men are so judgmental!

Stacking the deck: "White Privilege" theory in a nutshell

The "Progressive" Left, however, is not interested in everybody playing by the same rules and being judged by the same standards.  Adherents  have produced out of whole cloth the notion of "White Privilege".  As you can see in the image below, here is how White Privilege theory answers the assertions that anybody can be racist or sexist:


Minorities2 cannot be racist and women3 cannot be sexist, because they "do not hold political, economic, and institutional power".

In essence, whites (especially white males) have a stranglehold on political, economic, and institutional power, and whites employ that power to oppress women and ethnic minorities -- even without consciously meaning to.  The oppressors enjoy all of the privileges of being in the oppressor class, and they jealously guard all of the privileges they enjoy.

So you see, if you're white -- especially a white male -- the deck has been stacked against you.  These terms have been subverted to exclude the possibility of any opposing viewpoint.  Suggestion: if you find yourself in a debate with a Progressive over one of these issues, let them know you refuse to engage them until they prove to your satisfaction that White Privilege is an actual thing.

Footnotes:
1 Progressives are pushing hard on the notion of gender fluidity4 nowadays, and that would seem to render the whole notion of sexism moot...wouldn't it?  Sexism seems to imply binary gender.

2 Many Progressives exclude Asians from the ethnic minority status (witness the active attempts to discriminate against them in California public universities), because for the most part they refuse to act like they're oppressed.

3 White women have the dubious honor of being both oppressor and oppressed, depending on the topic of the moment.

4 (Wow, a footnote on a footnote!) Many Progressives define the "oppressor" class as white heterosexual males to allow white sexual minorities to be counted as oppressed in some circumstances. 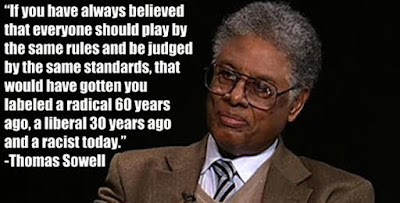 "If you have always believed that everyone should play by the same rules and be judged by the same standards, that would have gotten you labeled a radical 60 years ago, a liberal 30 years ago and a racist today.  -- Thomas Sowell"

Dr. Thomas Sowell, who announced this week that he is retiring, has been a tremendous asset to the national conversation on race and equality.  He will be dearly missed, but I wish him a happy, healthy retirement.
Posted by Tim at 12/28/2016 12:28:00 PM No comments: