When the going gets rough, the Democrats run away -- First Wisconsin, now Indiana

Just like in Wisconsin, today in Indiana we are being treated to the spectacle of legislators from a minority party, completely beholden to a small constituency (less than 12% of all workers nationwide, according to the BLS), refusing to live up to their constitutional responsibility. Indianapolis Star, February 22:


Seats on one side of the Indiana House were nearly empty today as House Democrats departed the the state rather than vote on anti-union legislation.

A source tells the Indianapolis Star that Democrats are headed to Illinois, though it was possible some also might go to Kentucky. They need to go to a state with a Democratic governor to avoid being taken into police custody and returned to Indiana.

The House came into session twice this morning, with only three of the 40 Democrats present. Those were needed to make a motion, and a seconding motion, for any procedural steps Democrats would want to take to ensure Republicans don’t do anything official without quorum.

With only 58 legislators present, there was no quorum present to do business. The House needs 67 of its members to be present.

House Speaker Brian Bosma said he did not know yet whether he would ask the Indiana State Police to compel the lawmakers to attend, if they can be found.

It seems obvious that the Dems hope to be seen as heroic, on a par with anti-regime protesters in various Middle Eastern countries, but the fact of the matter is that they are cowards who refuse to acknowledge that their biggest campaign cash source is a huge drag on our ailing economy and on the taxpayer's wallet.

A question I wish Wisconsin students would ask their teachers

"Teacher, based on your actions of the past several days, can I conclude that you think it's okay to lie and steal if it's for a cause you feel strongly about?"

The Atlantic's Ford Vox (himself a brain injury physician) is horrified to learn that many doctors in Wisconsin have conspired with public school teachers to defraud taxpayers by writing fake sick excuses.  Read what he has to say in his February 21 post.  He links to several Youtube videos documenting this activity -- which ought to be sufficient to get the teachers fired and the doctors hauled before medical ethics boards.  Here's one of them: 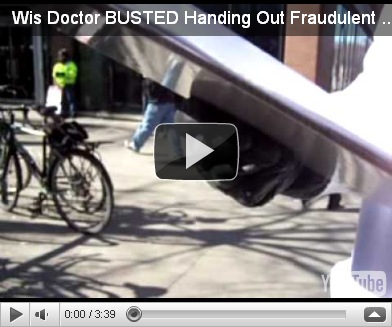 By continuing to hide like cowards in another state, and by declaring their solidarity with the protesters, it can be argued Wisconsin Dem senators are tacitly endorsing these tactics.


The University of Wisconsin School of Medicine and Public Health is investigating whether some of its doctors wrote fake sick notes to people protesting the governor's plan to strip public union employees of the right to collectively bargain.

Over the weekend, FOX News reported that doctors from the University of Wisconsin School of Medicine were manning a doctor station to write medical notes excusing those protesting at the Wisconsin State Capitol from work. Physicians were seen standing on a street corner wearing lab coats and giving out medical notes.

Reuters reported February 18 that California-based Intel is planning to invest up to $8 BILLION in new manufacturing facilities in Arizona and Oregon.  I wonder why they didn't think it worthwhile to invest the money a little closer to home base?


Intel Corp plans to build a $5 billion, cutting-edge microchip factory in Arizona by 2013, sharply ramping up its U.S. manufacturing capacity as part of a major global expansion.

The state-of-the-art plant, which will crank out microchips with next-generation 14 nanometer line-widths, is expected to bring thousands of jobs to the cash-strapped western U.S. state, which is offering more incentives to lure businesses.

[...] Intel said in October it plans to spend $6 billion to $8 billion on high-tech manufacturing facilities in Arizona and Oregon, creating as many as 8,000 construction jobs.

I'm sure that California's neighbors will be happy if the state keeps making it hard for businesses to do business there.
Posted by Tim at 2/21/2011 10:25:00 AM No comments: